Driving On Black Ice: Watching Out Is Key

Home/Auto Repair Articles/Driving On Black Ice: Watching Out Is Key
Previous Next

Driving On Black Ice: Watching Out Is Key

Black ice: It sounds like the title for a new horror film — the sequel to the Creature from the Black Lagoon. But black ice is a real thing, and driving on black ice during winter can cause real safety problems if you aren’t prepared for it.

Black ice is technically misnamed: It’s actually ice that froze clear, so it allows whatever’s beneath it to show through. When it appears on roadway asphalt, it looks black.

The problem with black ice is that it’s very hard to identify. You might not see it until you’re driving on it, and by then it’s too late.

How can you avoid the dangers of driving on black ice? Anticipate it. Black ice only forms under certain conditions; the trick is knowing when to expect black ice, so you have a chance to avoid it.

First, remember that ice of any kind only forms when there’s water around: rain, sleet, snow, and so on. So, if you’ve experienced any of those conditions rece 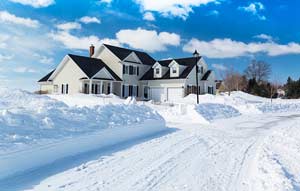 ntly, you should be on the lookout for
black ice while winter driving.

Next, it has to be cold enough for the water to freeze. That’s why you’re more likely to see it at night or in the early morning, before the sun comes up. It’s also likely to show up in shady areas. Bridges are often susceptible to black ice, because the cold air flows over and under the surface at the same time, so it’s more likely to freeze the surface.

How To Stay Safe While Driving On Black Ice

Icy roads and winter driving can be treacherous, but a little care and knowledge of what to look for can help protect you under even the worst driving conditions.