Check Engine Light Code – Should You Pay For A Diagnosis?

Home/Auto Repair Articles, General Repair/Check Engine Light Code – Should You Pay For A Diagnosis?
Previous Next

Check Engine Light Code – Should You Pay For A Diagnosis?

You’re driving down the road when all of a sudden the “Check Engine” light comes on. So you take it over to your nearby Cottman center and ask them to check it out.

The technician comes out to your car, armed with an impressive-looking scan tool, plugs it into your car, presses a few buttons, and tells you there’s a code in memory. Then he explains it’ll need further diagnosis, which you’ll have to pay for. 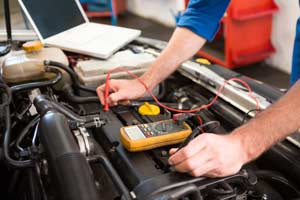 Wait, what? Pay for diagnosis? Isn’t that what the scan tool just did?

It’s a nice thought, but no, plugging in the scan tool wasn’t a diagnosis. All it did was allow the technician to look for a check engine light code. The code indicates that the computer recognized a problem in the system. But it doesn’t say for certain what’s actually causing that problem.

But all too often it doesn’t.

That’s because there are a lot of other possibilities that can cause the computer to set a code. A shorted wire, a broken air intake, a loose ground… in some cases even a fault with another sensor that shares some common wiring can cause a code to set.

The code is just there to identify a system fault and point the technician at a specific system. From there the technician has to examine the system to determine the precise cause of the problem.

Truth is, you want the technician to diagnose that system further, and it is worth paying for. If not, he’d just end up throwing parts at your car… parts that might not fix anything. And those parts can be pricy.

Your local Cottman center technician knows this. That’s why he insists on performing a proper diagnosis: to make sure that any repairs he recommends for your car are needed repairs. And that’s good for both you and the shop.

So, no, the check engine light code doesn’t say what’s wrong with the car. It just points the technician in the right direction. He won’t be able to tell you what’s wrong until he’s performed a diagnosis. Because that’s the professional approach, and that’s what you really want.