Coolant Vs. Antifreeze: What Does Coolant Do?

Home/Auto Repair Articles, General Repair, Maintenance/Coolant Vs. Antifreeze: What Does Coolant Do?
Previous Next

Coolant Vs. Antifreeze: What Does Coolant Do?

Today’s coolant has many functions within your vehicle. It prevents corrosion, lubricates the water pump, and raises the boiling temperature in your car’s cooling system.

What Is the difference between Coolant Vs. Antifreeze?

Back in the day coolant was called antifreeze; today the more accurate term is coolant, because it does a lot more than prevent the water in your car’s radiator from freezing.

While a few auto manufacturers have their own specialized coolant, most cars are covered by just three different types: 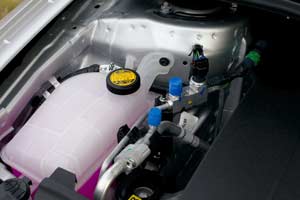 While it’s called a “permanent” coolant, most people should have their ethylene glycol antifreeze changed every few years. That removes contaminants and replaces worn out additives to protect the car’s cooling system.

In general, there’s no reason to use Dex-Cool in your car’s cooling system unless it came with Dex-Cool from the factory. Mixing Dex-Cool with any other coolant will reduce its protection to where it’s no more effective than regular ethylene glycol.

Ethylene glycol in any form is harmful to people and pets.